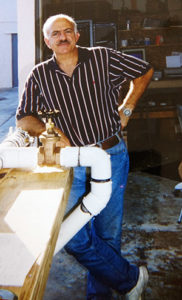 Inside an interview with Howard Specker, President and founder of Chemical Injection Technologies, Inc.:

Back in the day…

Well, I started in this industry back in 1969 with a job at Capital Controls Company, up in Colmar Pennsylvania. They were manufacturers of gas chlorination equipment. The man who started that company, Jim Haskett, he had invented the direct cylinder mounted gas chlorinator, back in 1960, kind of changed the industry completely. I started working in the advertising/marketing department as a technical writer redoing all of their manuals and so forth. Eventually took over the advertising then the marketing, but also became an assistant to Jim, and he became my mentor and my friend. Taught me a lot about gas chlorination equipment, pretty much everything there was to know. Took over all of the marketing programs until he left in 1973.

A big company bought Capital Controls. I moved down to Florida to join Jim in 1975 and started another company, here in Florida. We developed another gas chlorinator, improved some of the materials and so forth. Jim passed away in 1989 and I kind of retired in 1991. I thought I was going into the consulting business. I did do some consulting work, but people kept calling me, including a very good friend of mine in France who came over here, unannounced, knocked on my door one day, said “we have to go back into the chlorinator industry”. He convinced me to do it. He was a good friend of mine and a distributor of ours.

So I sat down with a drawing board, redrawing gas chlorinators, and quickly realized I did not want to do that, so I took up a CAD program which was fairly new at that time. There weren’t too many of those things around, then, and it was wonderful. If Jim would have seen that he would have loved it. I designed the SUPERIOR Gas Chlorinator. I improved a lot of the materials, made the design simpler. The rest is history.

We took off! Created a company that not only had a better piece of equipment, but I also wanted a company that was built around the way I wanted companies to treat me when I would call them. The customer service aspect was a major, major point for me.

Check back in with us to find out more about CIT.   Click here to see the Chlorinator Guys on YouTube.